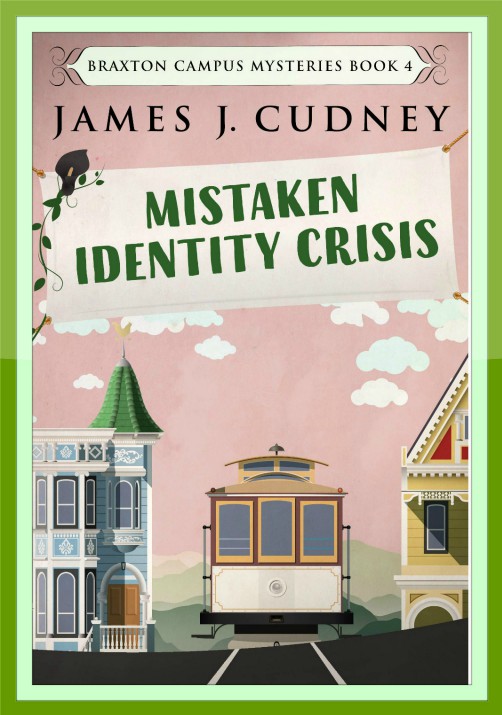 The Writer’s Grab-Bag isn’t a stop on the book tour, and the original plan was to wait until the end  . . .  but what the heck?  Let’s aim for sooner than later.

James J. Cudney IV—Jay—has a fourth book in the Braxton Campus Mysteries called Mistaken Identity Crisis.  I had an opportunity to read it a wee while back and thoroughly enjoyed it, as I did the others.  It has all the elements of a cozy— an affable protagonist [with adorable young daughter], likable regulars, a host of suspects, and the putting-together-the-pieces-of-the-puzzle mystery.

Kellan is a Braxton professor and amateur sleuth.  He has a supportive family, love interest, and eccentric in-your-face grandmother you gotta love. The case officially begins when a missing ruby is found near an electrified dead body during the campus cable-car redesign project.  Not only must Kellan must locate the real killer to protect his brother, he has a delicate if not dangerous personal family matter to resolve.  Add a sundry of jewel thefts to the murder, feuding mobsters, and you have a thrilling, fun whodunit.

Come visit Wharton County.  Get to know the townspeople.  Learn how Nana D does as the new mayor.  Follow Kellan as he sorts through the suspect list . . . and solves the case.

A worthwhile read, my friends.  Enjoy!