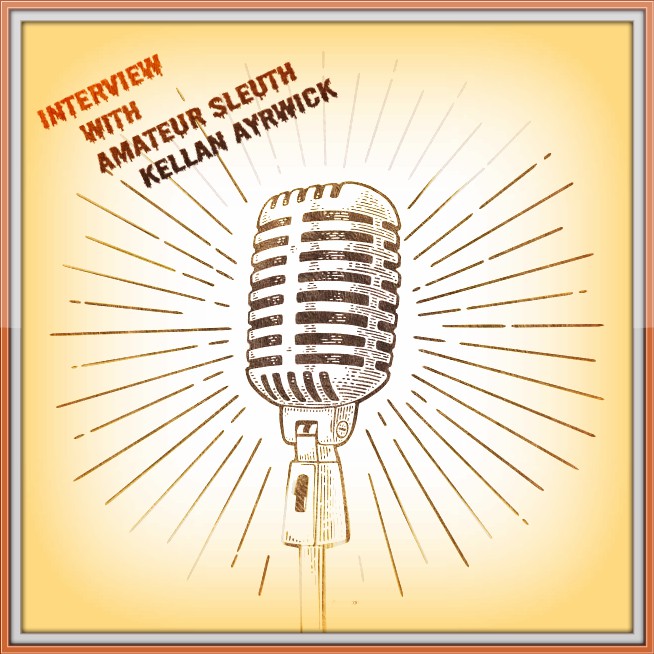 Ta-da!  He’s he-ere.  I’m thrilled to have Kellan Ayrwick from Wharton County visit today. In addition to serving as a part-time sleuth and single father, he’s a brilliant Braxton College professor who has also worked in TV.  He’s solved some exciting mysteries in a quaint and quiet part of Pennsylvania, Wharton County, where mob members, mystifying murders, and daunting ghosts are but a few of the challenges he’s encountered.

Without further ado . . . let’s get to know this dynamic sleuth that wee bit better.

Kellan Michael Ayrwick is such a distinguished name.  Would you please share the origins with us?

Absolutely. Thanks for asking. My first name is a bit unusual. I’m the middle child of five siblings. My parents wanted unique, older names for their children. I’ve been told they wanted it to start with that hard “c” or “k” sound, and they like repeated consonants, especially after a trip to Spain; hence, the double l. Just like in most Scottish and Irish families, children’s middle names come from their parents or grandparents. My older brother Hampton got my father’s name as his middle name, so when they chose mine, they went with Grandpa’s. He was Nana D’s husband, Michael Danby.

Ayrwick is a little more of a family story. My relatives originated in the town of Ayr in Scotland. They were candlemakers and, so, when the overseer and tax collector had to enumerate for our town, he’d listed it as Ayr, Wicks. Somehow, it was translated into Ayrwick on the official records when my ancestors immigrated to the United States.

Tell us what it’s like to be a professor, single father, and amateur sleuth.  Which role is the most challenging?  Why?

Being a single father is the most challenging. When I lived in Los Angeles, I relied on my in-laws, who often had their own ways of parenting. Trying to balance their styles with mine, without offending them anytime I’d suggest a different path, was not easy. I thought it’d get better when we moved back to Pennsylvania. Now, I have my parents and Nana D trying to tell me how to raise my daughter. They mean well, and I wouldn’t be able to survive without their help, but poor Emma is already turning into a mini Nana D. The world only needs one of them, right?

I obtained my PhD, but didn’t stay in academia in Los Angeles. I worked in Hollywood and learned all about the film industry. When I moved back to Pennsylvania and took the job as professor to help my dad out, I thought it was temporary. The opportunity to build a new film program at the school was too enticing, so now I’m back in academia full-time. I enjoy being able to work with young adults and new minds who love the entertainment business as much as I do, but I miss the challenge of solving complex puzzles.

I think that’s why I find being an amateur sleuth the most fun. Except for those few times where the killer almost succeeded in knocking me off too. I have high standards. Being able to hold people accountable for their actions is important to me. I obey the laws and dislike when others treat them carelessly.

If you could have pursued any profession, which would it have been?

I think I might have chosen the right one. Research is my expertise. I read people easily, and I know what questions to ask to find the right answers. Sometimes it takes a little longer than I’d like, and at others I am blindsided. But, ultimately, my instincts have been spot-on. If I went with a profession purely for fun and pleasure, I think I should’ve been a baker. I’d weigh three times as much and probably die sooner because I couldn’t stop eating all the time. But there’s a downside to every job, I suppose.

Do I really need to admit the truth here? I was a good student. I did well, but I was also the president of my fraternity and often got into a bit of trouble. I am great at anything that involves thinking and analyzing. I’m unusually smart when it comes to mechanical things, too. I can take almost anything apart and put it back together again. On the flip side, I wasn’t very strong in business classes and foreign languages. I don’t like to travel by plane, so it’s limited the places I can go. I never did have the ability to grasp grammar in other countries.

Grandpop Michael, my mother’s father. He’s my idol. I love my father, but he focused more on my older brother. Grandpop Michael took me under his wing when I was a teenager, teaching me everything I know today. He was an honest man who understood people. He didn’t believe in acting tough, lying, or being ornery. There wasn’t a soul who disliked my grandpop, and that’s what I aim for every day of my life.

Which has proven your trickiest, most perplexing mystery (thus far)?

This ghost who’s been haunting my house. I can’t tell if (s)he’s real or fake. I never believed in that paranormal side of life, but after my experience in the spooky corn maze, my entire mindset has changed. I can solve a problem when I can talk to a person, ask questions, and get at the core of the situation. When I can’t actually connect with something tangible, I’m at a loss. Hopefully, I’ll solve it soon, as I really want to move into the new house without worrying about a ghost trying to kill me. Did you see the message (s)he left on the basement door?

I did indeed—spoo-ookingly scary!   … Tell us, please, what do you like most about Wharton County?

It’s got the best of everything. Four seasons, even if I dislike the cold. Mountains, valleys, farms, rivers, lakes, forests, and an urban center. It’s only a few hundred square miles, and it’s relatively close to bigger cities like Philadelphia and Buffalo. Then again, you can hide out and never be found for years too. It’s the type of place to raise your children among family and friends who support one another. Up until recently, they had relatively few murders. I’m not sure what happened in the last six months since I returned. Maybe the ghost has been more active than we knew about.

There was quite a bit of hoopla surrounding Francesca’s death—including mobster ties.  Would you share a little about that?

It’s barely been three months. I think we’re all still recovering from that explosive reveal. I’m grateful that Emma has taken the news so well. It’s not every day that your mother comes back from the dead. If I had known my wife was part of a mob family, I might have thought twice before asking her to marry me. I always knew those Castiglianos were trouble, but I couldn’t have predicted this outcome. We lost a family member in that mob war last summer. It doesn’t matter who did what, death is never easy. After it happened, I spent days with my daughter, ensuring she recovered from being kidnapped by that crazed villain. It’s only now that I see shades of my daughter returning back to her innocent youth.

What has been the most precious or special moment in your life?

Definitely the day Emma was born. After her, I think reconnecting with my family after a decade’s absence. We kept in touch and visited once a year, but it never felt the same. It’s taken a few months, but I now feel like we’re ready to trust one another again. It’s not like anything major happened to separate us … just that family is incredibly important. Sometimes you don’t realize something until you almost lose it.

If we’re speaking outside of family events, I think accomplishing so much in such a short-time period. I’ve worked in Hollywood, become a professor who specializes in film studies, joined the team to convert Braxton from a college to a university, and solved seven murders. I couldn’t choose between any of those, but being able to balance all of it together and raise my daughter, now that’s something to be proud of. I never put that all together until just now. Thank you for making me see it was such an achievement.

Do you have any regrets—about anything?

Grandpop Michael always told me not to regret the things I’ve done. Every action has consequences, and if you change even the slightest, the ripple effect is beyond anyone’s understanding. That said, if I could change a few things about the past, I’d probably try to stop Gabriel from leaving Braxton years ago. Too much happened to our family that changed the landscape of our future. I’m glad to have him back, but we lost more than five years of being brothers. That’s a lot of time, especially when we were once so close.

What floats your boat?

Are we talking literally or figuratively? I don’t own a boat, so I’m assuming you mean figuratively. That’s easy. Desserts. I will do anything for dessert. I can’t help it. I have uncontrollable cravings, and since it’s not caused any problems with my health, I will continue to devour any and all desserts. I have noticed my workouts need to happen more frequently, and I am occasionally defying the limits of gravity with my clothing. If for any reason my health or the size of my pants were to change, I’d cut back. I love having a racing horse for a metabolism. Until that time things change, my boat floats to desserts. Got anything new for me to try?

<LOL>  I’ll let you know later.  Last question, Kellan: who is your favorite detective?  Why?

If I don’t say April or Connor, am I in trouble? Please let the record show, they are my favorites. If you torture me to say another name, I’d admit to loving Sherlock Holmes. He’s arrogant but clever. People sometimes think I’m a little too sarcastic, but it’s different when you hear me speak. I’m witty and funny and light about it … I’m never mean-spirited, and I often laugh at myself. A few people have written opinions about me (I won’t name names) that I seem banal or pretentious. Nothing could be further from the truth. I just tend to be a little humorous rather than so serious all the time.

Awesome.  Thank you so much for taking the time to visit and share.

For those of you not familiar with Kellan’s sleuthing, I highly recommend you check out:

By the by, Kellan’s charming grandmother and go-getting mayor, Nana D, will be here on the 23rd of this month!