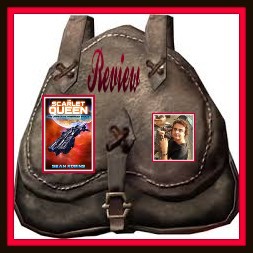 It’s time for another Sean Robins review.  Our prolific writer has penned another book, The Scarlet Queen, the prequel to the well-received The Crimson Deathbringer series.  This time, we follow beautiful Xornaa, a “femme fatale mercenary”—and Xortaag spy—who becomes involved in time traveling with the intriguing if not unique Klatzo, creator of the time machine.  In addition to (expected and desired) engaging battles, there are more life-saving episodes (but no spoiler alerts as to outcomes).

There are references to characters from the series (like Tarq the impassioned prankster and Maada the dogged general), which bring back welcome memories of those other exhilarating stories and danger-fraught and oft crazy adventures.

Up until then, I still had a faint hope that we could make it to the jump point, but it evaporated with the arrival of the new enemy ships. I closed my eyes, let out a long low sigh, and covered my face in defeat. The thought that everything I’d done, including inventing a freaking time machine, had been for naught stabbed at my heart.

I clenched my fist so tightly that my hands started shaking as a vein began to pulse in my forehead. Then I heard my doppelgangers shouting in excitement. I looked at my tactical display and, in sheer astonishment, realized the new ships were shooting at their own space fighters.

I blinked and checked my tactical display again to make sure my eyes weren’t deceiving me. Nope. It was real.

Two of the pursuing space fighters were hit before their pilots realized what was happening. The other two broke and flew in opposite directions, but each had three vessels on their six, and I was certain even their pilots knew they were doomed. They threw their space fighters up and down, left and right, and tried to avoid the incoming fire, but they joined their dead comrades in less than two minutes.

What the hell is going on?!

What the hell indeed?  You’ll just have to read The Scarlet Queen to discover what happens!

For those not yet familiar with Sean, he’s a huge fan of Marvel, Game of Thrones, Star Wars, and Star Trek.  He’s also a university/college level English teacher who has lived and worked in different countries.  To find out more, please check out Sean and his new book out at: