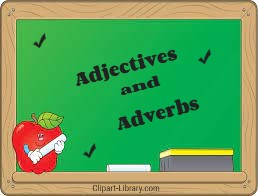 Adding adverbs and adjectives—not in overabundance, but within reason—enables readers to more readily visualize the action and characters.  They detract from the flatness of the “he said” and “she said” dialogue tags, and the “she walked across the room” and “he looked at her” type of sentences.

Consider the examples below.  With the addition of an adverb or adjective, or two, don’t they offer more “images” into what is transpiring, how someone is feeling?

Example 1 suggests Martha’s happy, looking forward to seeing Darren while example 2 says she’s not happy to be doing so.  In the third one, Martha seems uncommitted; she doesn’t really care one way or the other and the fourth indicates a number of things, but more than likely, she doesn’t care for the question and doesn’t want to give a detailed answer, or she’s heard the question before and is repeating the response.  It’s all in the interpretation.

Jeremy looked at Doris and smiled.

2.    Jeremy scanned Doris from head to foot and offered a flat smile.

4.    Jeremy stared at Doris with a cool smile.

Example 1 suggests Jeremy likes what he sees, or is pleased with Doris’ reaction, and responds accordingly.  The second example tells us Jeremy isn’t overly pleased with her and the third one has a similar connotation.  Example 4 implies he’s annoyed with Doris, or is angry perhaps.  Again, it’s all in the interpretation.

Just how many ways can we smile?

Just how many ways might a character have “said” something?

The sky’s the limit.  Choose the right adverb/adjective for the situation and action—right as in mood/feeling and in meaning (it’s amazing—and not in a good way—how many people seem to pull a word from the thesaurus without checking its definition).  As I always say, be as professional as possible.

Adverbs and adjectives can truly add so much to a story . . . as long as the writer doesn’t add too much, as in too many.

Remember: everything in moderation.