Starting today through the 17th, you can get Can You Hula Like Hilo Hattie? for 99 cents!

Hula’s our first official—paying—case.  Yes, Rey, JJ and I are true-blue (novice) private investigators now and we’ve been hired to learn what an elderly millionaire’s pretty, young wife is up to.  Is she having an affair, as hubby believes?

There’s a twist: said wife is found murdered along the beautiful shores of Oahu.  And there’s a secret all right, one of many in fact, and they don’t all belong to the deceased woman.  Who of this unconventional cast of characters is the murderer?  We’ve dealt with a sundry of murderers in past, thanks to a weird week at a haunted mansion in Connecticut, but this new set of quirky personalities proves taxing.

What initially seemed a straightforward task is anything but.  And what do the worlds of drugs and gangs have to do with what’s transpired?

As we’re attempting to fit puzzle pieces together, we stumble across a few more bodies.  Here’s an opportunity for us to prove we made a wise choice in becoming bona-fide detectives.  But can we do so before the murderer strikes again?

If you’d like to read about our thrills-and-chills-filled case (as Rey just called it), please check us out at . . . 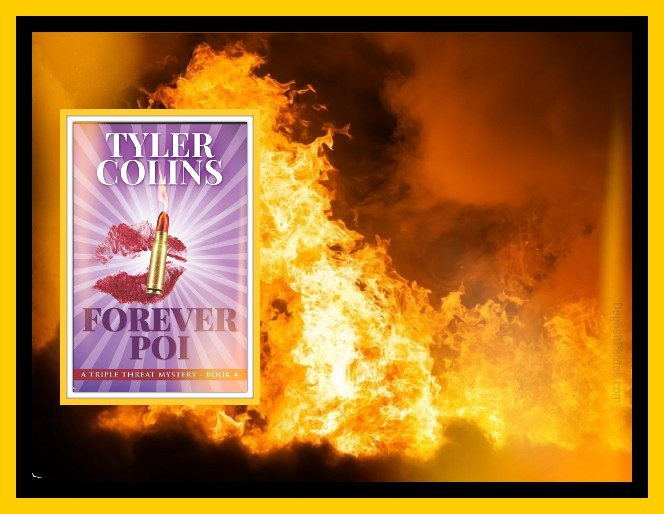 Forever Poi is available for 99 cents for one more day—as in today.

This time, JJ, Linda and I are out to solve a double-arson and murder.  Who torched two Chinatown art galleries and left two charred bodies in the rubble?  Are the arsonist and killer one and the same?  We think so.  But as we try to prove that, we encounter a plethora of possible culprits (JJ just loves—what’s it called again—ah, yeah, alliteration).

The day before the fire, Carlos Kawena, one of the arson victims, had a nasty break-up with his partner, James-Henri Ossature.  There were financial issues, too.  Could James-Henri have done the dastardly deed to collect insurance and be rid of his lover?  What about the second victim, Mary-Louise Crabtree, a former queenpin?  Given her super sketchy past, maybe a former foe murdered her?  And, if that’s the case, maybe Carlos was simply collateral damage.

When we’re hired by insurance adjuster Xavier Shillingford to assist in the investigation, it soon becomes evident that professional arsonists didn’t set the fires.  As they immerse themselves in the challenging case, a host of curious characters again materializes.

“Is this the Triple Threat Investigation Agency?” a soft, prickly voice asked.

I swallowed a retort. “The one with the honey highlights.”

“JJ, right.” His soft, thin whistle was reminiscent of a White-Throated Sparrow. “I tried A and he’s not answering.”

“Maybe he turned his phone off.” A wave of weariness washed over me and I leaned into a wall. “The guy’s been working long hours.”

“Maybe, but it’s not like him not to be available.”

I forced a neutral tone. “What can I help you with, Crispy?”

“I been asking around. The fire wasn’t set by anyone in my circles.”

“You mean your firebug friends?” I asked dryly.

“Incendiary friends, if you don’t mind,” he gibed.

It’s Rey today, hey!  It’s the last day to get Caper for free!

A week-long stay in a creepy colossal Connecticut mansion has us tripping over disappearing and reappearing corpses, hearing weird [scary] sounds from behind walls, and walking down shadowy hidden passageways.  Why?  Because seven quirky inheritors have gathered to collect their share of the money that wacky Aunt Mat left for them in her will.  And if dead bodies aren’t enough to make for hair-raising moments on a secluded storm-bound estate, how about a ghost named Fred?

There’s a clause in the will: if a guest leaves early, his or her share will be divided among those remaining.  The first one to leave—permanently—dies just hours after arriving.

Cousin JJ and my BFF Linda and I pull on amateur sleuth caps and determine to solve the mystifying murders.  We don’t do too badly, either.  Our “results” result (he-he) in the three of us opening the Triple Threat Investigation Agency and becoming professional private eyes.