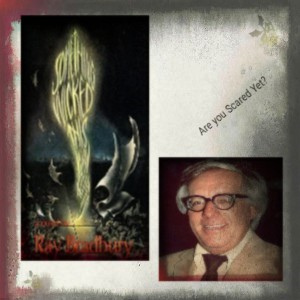 And that would be Ray Bradbury’s Something Wicked this Way Comes . . . another terrific book that I’ve read a few times . . . simply because it’s that good.  I’m not a fan of the sci-fi, horror or fantasy genres per se (I prefer the “reality” of fiction, he-he), but Bradbury’s my exception.  Never got into King but did read some Koontz back when.  A gal-pal was a horror fan and suggested—badgered—I read a few of her favorites (hers, I emphasize, far from mine).

Bradbury was on my junior high school English-class reading list—The Illustrated Man, Fahrenheit 451, and Dandelion Wine specifically.  I so enjoyed those, I went out and bought The Martian Chronicles and Something Wicked this Way Comes.

Something Wicked was written in the early 60s and is described as “dark fantasy”.  It revolves around two teenaged best friends, Jim Nightshade (great name) and Will Halloway, who are about to turn fourteen.  The story opens with a lightning-rod salesman, Tom Fury (love it) telling them a storm is headed their way.  Fury, by the by, isn’t necessarily what he seems, but you’ll have to read the book to learn more.  That night Will and Jim meet up with townspeople who sense something [ominous?] in the air.  Oooh, what could that be (in addition to foreshadowing)?

Boys being boys, the two head out at three in the morning to watch the arrival of a traveling carnival . . . one that turns out to be pretty freaky and creepy.  Even more eerie?  The carnival is overseen by—got to love this name too—the mega-tattooed Mr. Dark.

Dark has magical powers of the, pardon the pun, dark side; he can make wishes come alive.  He’s also pretty good at sucking the life out of folks.  Fear is a predominant theme in the book—like that which Will’s father harbors of growing old.  Jim, on the other hand, can’t wait to grow up.  Age/aging is also a theme.  Perhaps that’s why I could relate to this book so much; when I was younger I had an obsession with growing old (I absolutely feared it).

Like a carnival merry-go-round, Something Wicked spins a fascinating if not frightening tale of the proverbial good versus bad—or the upright versus the wicked.  And something I hadn’t known (or perhaps it had been forgotten over the years), the title is based on a line from the weird witches in Macbeth: “by the pricking of my thumbs, something wicked this way comes”.  Ni-ice.

Yes, there was a movie of the same name, and the 1983 flick was a decent adaptation of the book (saw it three times).  It featured Jason Robards as the unhappy father, Jonathan Pryce as the devious Mr. Dark, Vidal Peterson as Will (and Arthur Hill as the adult Will narrating), and Shawn Carson as Jim.

An America screenwriter as well as an author, it’s said Bradbury started writing during the Great Depression at the age of eleven.  Impressive indeed.  A fascinating man, he received countless awards, was a strong supporter of public library systems, and served as consultant for the Los Angeles Student Film Institute, among many other things; I won’t reiterate/list what you could easily Google if you’re interested.  But this talented man certainly entertained—and prompted a few frissons—over the years.

Hmmmmm . . . think I’ll head down to the storage room and pull out a Bradbury book or two.