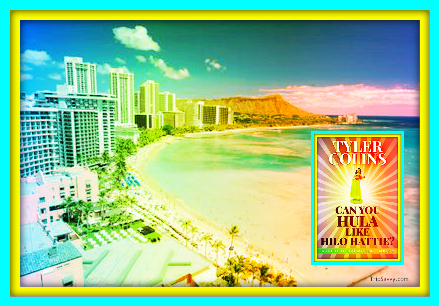 Can You Hula like Hilo Hattie? is a mere 99 cents through August 17.

Newbie private eyes JJ, Rey and Linda accept their first official detecting assignment: learning the “secret” of an elderly millionaire’s pretty young wife.  He believes she may be having an affair.  If they succeed, their newly founded business, The Triple Threat Investigation Agency, will prove a viable venture.

The twist: the wife is found murdered along the sapphire shores of Oahu. And there’s a secret all right, one of many, and they don’t all belong to the deceased woman.

We’d only had to demonstrate she was a cheating spouse who possessed a secret that could prove of value to her husband and help dissolve a four-year marriage. All that had been required: surveying the woman, taking photos as necessary, and delivering nightly reports. Easy-peasy. Not.

What we’d unearthed in the preceding days extended to the sordid world of drugs and gambling, two ugly and dangerous addictions that could drag you under and far like the Molaka’i Express, which was the crossing of the Kaiwi Channel from volcano-formed Molaka’i, Hawaii’s fifth largest island, and possessed exceptionally strong currents. If the vice didn’t batter you, the enabler—the human component—was there to ensure you remained dependent, paid up and/or stayed high, and never screwed him or her.

“Man, she must have really pissed someone off.”

“Big time.” I peered across the darkening Pacific and reflected on that which had brought us to Hawaii: a desire to open our own P.I. agency. But the body sprawled across rough wave-soaked rocks begged one crucial question: what did a meteorologist, actress, and scriptwriting assistant know about detecting? So what if they’d played amateur sleuths several months ago during a murder-filled week at an eerie Connecticut mansion? That didn’t grant them the expertise or street smarts to manage a bona-fide case.

. . . But maybe the more imperative question at the moment was: how were they going to explain a simple undercover-case gone terribly wrong?

If we’ve piqued your interest, please check us out at: