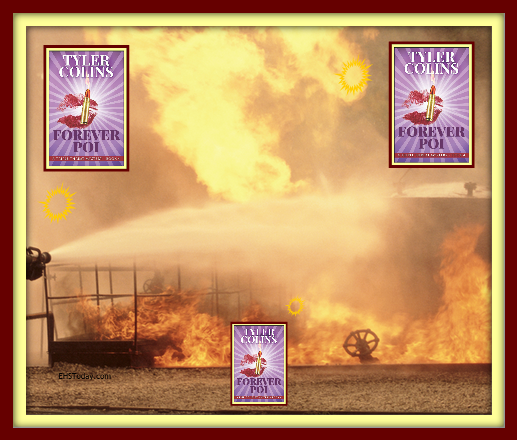 It’s Linda on the third day of the Forever Poi promotion, an exciting Triple Threat Investigation case, if I do say so myself.  Today, through June 12th, it’s available for a mere $0.99.

We’ve been engaged by an insurance adjuster to investigate two art gallery arsons, which also claimed the lives of gallery owner and partner, Carlos Kawena, and former queenpin, Mary-Louise Crabtree.  JJ and Rey and I encounter several possible suspects.  The day before the fire, Carlos had a heated break-up with his partner, James-Henri Ossature.  Could James-Henri have killed his long-time lover to collect insurance money?  Given Mary-Louise’s sketchy past, might a former foe have murdered her?

Perhaps we can tantalize you with an excerpt . . .

“Why do you suppose he’s not returned calls?” Rey asked as we followed the Jag along Kapiolani, five cars behind. “Guilt? Sadness? A combination of?”

“Only he can answer that.”

“Xavier mentioned a half sister. Maybe that’s her.”

“From what little I’ve seen, there’s absolutely no resemblance. James-Henri has a dumpling nose and a donut-round face.”

“And he has hazel eyes while hers are powder-blue,” I added. “I did say ‘maybe’.”

The sporty car pulled into one of three empty spaces before a row of unexceptional townhouse-condos near Ward and Prospect. Most had once been dusty pink and were now just plain dusty. I maneuvered into a parking spot on the street.

“He did have financial issues according to Ald.”

She gestured the duo. “They don’t appear to want to do much but yak and watch.”

“Maybe they know we’re back here.”

“You got me,” I replied with a fleeting smile, keeping a vigilant eye on the two lest they shot off again.

“It’s odd that Carlos lived here and James-Henri there. I mean, they were lovers, at least until recently. I can’t imagine one allowing the other to live in such a . . . a blah place.”

“Ugly. Cheap. It’s not in keeping with the lifestyle or persona he was projecting.”

Rey grunted into her cell when taiko drumming announced a call. “We got James-Henri and an Audrey Hepburn wannabe in sight. What’s up? You at the office?” She glanced at me and shrugged. After a few uh-huhs, she disconnected. “Lindy-Loo wants us to head home when we’re able.”

“She’s something, that’s for sure,” my cousin replied flatly and gestured. “Our prey aren’t doing much.”

“Either are we,” I said regretfully.

“To hell with that.” With Reynalda Fonne-Werde melodramatic (reckless) flair, my cousin sprang from the Jeep and strode purposefully to the Jag.

Three minutes later, she returned with an expression wavering between triumph and self-satisfaction. “James-Henri’ll meet us at two at a coffee house on Bishop just off Queen. Cholla, his ‘sister’, will not.” My cousin smiled haughtily. “That gal’s a stunner and f’g snooty. That Borgia ring you mentioned looks like the real deal. And those diamond studs have to be four carats. Besides a slight but obvious French accent, she likes to throw around French phrases like bien sûr and c’est pareil.”

“Is her accent as real as Ekeka’s British one?” I asked drolly.

“It sounds legit.” She swung into the passenger’s seat. “Let’s see what James-Henri has to say when we grill him.”

“Deciding if they should enter Carlos’ place to grab something.”