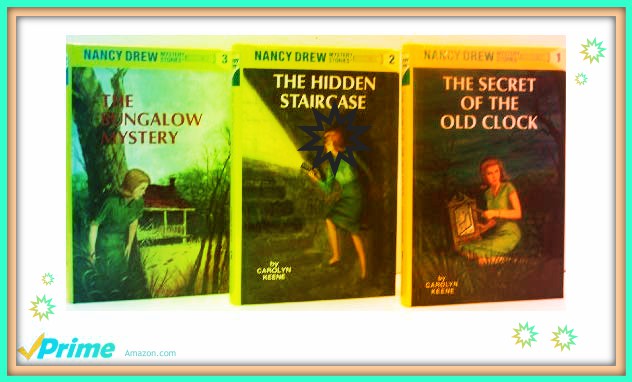 Last year I returned to Nancy Drew mysteries—Nostalgia-Land—rereading books I loved as a kid.

Before the holidays (pressie to self), I ordered a box set—1 through 10—and had a chance to read a few.  Given the ol’ stress level, the revisit to Nostalgia-Land/Drew-Land was a welcome break . . . and much needed escape.

Here are reviews for the first three in the long-established series.

The Secret of the Old Clock

This story was first written in 1930 and then rewritten in 1959.  Nancy aged two years, going from 16 to 18, and received a personality readjustment.

Our young sleuth is asked to help the Crowley family, courtesy of her fondness for a young girl being raised by the not-in-their-prime Turner sisters, Mary and Edna.  The snobby and snotty Tophams, who took in Josiah Crowley during his later years, are certain they’ll inherit everything . . . but, as Fate would have it, there’s a new will.  It leaves money to some very much deserving people.  Enter Nancy.  Will she be able to locate the legal declaration?  Where will she look?  In an old clock that Edna said Josiah had once mentioned?  Which one!?

Best friends Bess and George aren’t on the scene yet, but Helen Corning is.  She seems a bit flat, but maybe it’s because I like the cousins; they have personality.  It receives a 2.5. out of 5 because Nancy is on her own a lot and there’s way too much “thinking”.

Good friend Helen Corning, now engaged, asks Nancy to help solve the mystery of Twin Elms, her grandmother’s supposedly haunted house.  Before she and Aunt Rosemary arrive at Nancy’s home, a man arrives and advises the pretty detective that her father is in danger because of the railroad case he’s working on.

Despite a dangerous incident, Mr. Drew tells his daughter to go to Twin Elms.  Once there, Miss Flora tells Nancy about a ghost, how things are disappearing and strange things are occurring.  Music plays suddenly, a chandelier swings on its own accord, and a mask appears at a window.  Yup.  Bizarre goings-on indeed.  Intrigued, Nancy investigates the house inside and out . . . and eventually discovers a hidden staircase.  I won’t share where; you’ll have to read the book.

There’s also the subplot where Mr. Drew disappears and it’s feared the famous lawyer has been drugged and kidnapped.  This new and urgent mystery demands Nancy’s attention.  This one gets 3.5 out of 5 (I like “haunted” places).

The third story in the fun series starts with Nancy and good friend Helen on a boat during a storm.  A very ugly storm.   They capsize, but are rescued by Laura Pendleton, a fellow boater.  The trio row to a cove and head to a bungalow that Laura had noticed earlier.  They find food in a pantry; how lucky is that?  As the threesome dry off and warm up, they get to know one another.  Young Laura tells them she will be meeting her guardians—Mr. and Mrs. Aborn—at a local hotel, and then live with them in their home on Melrose Lake.

The Aborns are not the nicest folks and soon Laura calls Nancy to ask for help.  She escapes the room she’s been locked in and finds herself at the Drew house.  Fortunately, she took her mother’s valuable jewels with her . . . but that won’t stop the Aborns from trying to get them.  Whatever the cost.

Our resolute sleuth gets caught up in chases and explosions, and discovers the truth about the Aborns.  Missing money and securities are located, and crooks nabbed.  I’d give this a 2 out of 5 (it had some snoozer moments).

Definitely nothing wrong with visiting Nostalgia-Land or Drew-Land.  Enjoy(ed) them both and looking forward to doing so again!