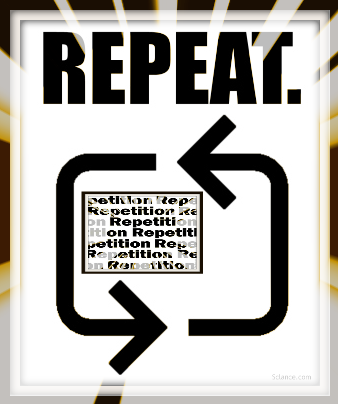 Private eye Gerald Macklin grabbed the Luger from the desk and hurried into the dim corridor.  He hurried in the darkness, trying to keep the weapon firmly grasped in his sweaty right hand.  A thud resounded on the first floor.  He hurried down the stairs and down a rear corridor, keeping a firm grip on the gun as he peered around the corner.  Seeing two shadows by the wall, he raised his sweaty right hand and aimed the Luger.

Not-so-good repetition is when a writer uses the same descriptive words in the same sentence or paragraph (or page) several times—without substance or structure.  This lends itself to redundancy, otherwise known as, yeah, repetition.

We want to create excitement, tension, emotion, conflict in our tales.  (Using the same words can do that, but this has to be done [effectively] well; we’ll touch upon this in another post.)  Overused words and phrases, however, weaken writing.  They tend to “weigh down” the story and contribute to the yawn factor.

Whenever possible, utilize descriptive words (verbs, nouns), but ensure they lend themselves to the intended mood.  Think: visuals, tone, ambiance.

Repetition equals flatness—so does “uneventful” text.  Not that you should attempt to modify or galvanize every word or expression, but give thought to being fresh and innovative.

Instead of:   white flowers

Instead of:   Lawrence fumed angrily and walked into his boss’ office.

Instead of:   The sound almost made him jump out of his skin.

Consider:   The shrill sound prompted him to jump.   /   A strident boom to the rear sent him racing into the darkness.

And back to our private eye example way above, let’s make it less repetitious and more interesting:

Private eye Gerald Macklin grabbed the Luger from the corner of his battered desk and hastened into the dim corridor.  Advancing quickly yet cautiously, he grasped the weapon firmly in his sweaty hand.  A loud thud resounded on the first floor.  A body?  Someone breaking in?  Or maybe out?  At the bottom of the winding stairwell, he dashed down another corridor and stopped breathless before Lincoln Ralston’s office.  Around the corner, by the far wall, stood two tall boxy shadows.  He aimed the Luger.  “Hold it right there!”

Besides using the same words/phrases repeatedly, avoid—dare I say it?—repeating details and/or history.  If you’ve provided information related to a locale or setting, don’t state it again a few paragraphs or pages later.  We had a good idea of what it looked like the first time.  The same holds true for characters.  If we know they’re chums as well as colleagues, have been partners for years, suffered a loss, or were born in another country, there’s little reason to state it a second (or fifth/sixth/seventh) time.  Establish the main [important] facts and embellish, as necessary, but don’t repeat them . . . and repeat them.

One last note, steer clear of clichés, which fall under the category of repetition.  Why?  Because they’re overused, trite.  We’ve seen/heard them <groan> repeatedly.  If a character uses them because they’re part of his/her persona, that’s one thing.  If the narrator/protagonist employs them—unless he’s Sam Spade, or being sarcastic or cute—you may want to avoid them. 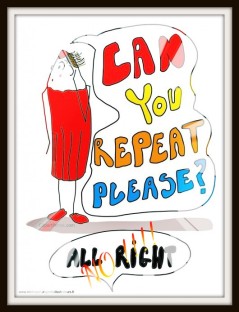