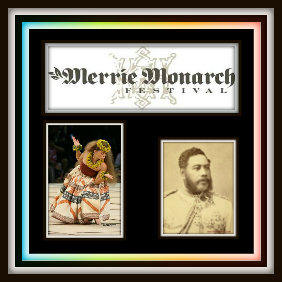 Hey, it’s Rey!  The Boss is taking the weekend off, so I’m doing the post, which I’m super stoked about.  Considering I’m not a fiction writer (and let’s not talk editor), I thought I’d post about something that recently took place here on the Islands, something JJ, Linda and I finally got a chance to attend and not just for one day, but four . . .

History’s always a “nice to have”, so here are a few fascinating facts:

◊  Missionaries phased out this beautiful dance back when, but—fortunately—it was revived decades later, during the reign of King David La’amea Kalākaua.  He once claimed that “hula is the heartbeat of the Hawaiian”.  A patron of the arts, the king was showy and extravagant, as well as playful.  Small wonder he was known as the “Merrie Monarch”—and that’s why the Festival is called what it is.  Love it!

◊  In Hawaii of old, written language didn’t exist, so hula and associated chants enabled Hawaiians to connect to the land and gods.  In Hawaii of today, hula is not only still a way to connect, it’s a way of life.

◊  During the early 60s, Big Island was looking for a way to boost the economy.  After exploring ideas/options, a committee came up with the first Merrie Monarch Festival.  In the early 70s, it changed objectives and focus to what, basically, it evolved into today: hula dancing, Hawaiian artistry, and embracing Hawaiian culture and its people.  It grew in popularity (majorly) and in 2013 the Festival celebrated 50 years of success.

“The Merrie Monarch Festival is a non-profit organization that honors the legacy of King David Kalākaua, who inspired the perpetuation of our traditions, native language and arts.  . . . Our week-long festival features an internationally acclaimed hula competition, an invitational Hawaiian arts fair, hula shows, and a grand parade through Hilo town.”

I thought the Merrie Monarch site summed it up nicely.  (Hilo’s on Big Island, by the way.  I think I’ll post about it next time around.  I’m happy and excited—and pretty proud—to share my thoughts about Hawaii.  It’s an awesome place to live.)

<LOL>  I wasn’t planning on providing so much background (Linda would be proud).

The Miss Aloha Hula competition was amazing.  We were riveted.  All 13 competitors were beautiful and talented (I have to confess, I was a bit envious).  Taizha Keakealani Hughes-Kaluhiokalani took the title . . . and then also won the Hawaii language award.  How awesome is that?

The hula Kahiko and hula ‘Auana contests were both a pleasure to watch—the dancing was divine and the costumes were stunning.  The wahini (women) were lovely and the kāne (men) drop-dead-whew! gorgeous.

Even got in some shopping—T-shirts, sweatshirts, and bags.  Those four days were totally nui.  If you get a chance to attend the Festival, please do . . . and make merrie!

Belgorod, Russia
She Got Wings!