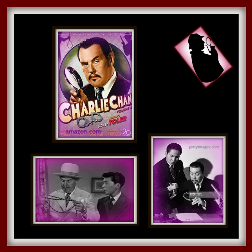 Hey-ho, it’s Rey.  The last favorite-detective post is mine.  Like JJ, I had two, but flipped a coin.  The original Magnum—not the latest, sorry—was up there.  A hunky private eye, he had an easy-going, laid-back attitude that made him really likable (never mind the great legs).  But I had to go with . . . Charlie Chan.  (Yeah, Linda was stunned, too.)

When I was a B-actress, I hung around with a clique (a different one from Linda’s) that was seriously into classic flicks, particularly B&W mysteries.  Fair-weather friends Flynn and Lynne loved Charlie Chan and got me hooked.  Chubby Charlie was calm and clever, and very wise, and had so many super cool sayings.  Fun/funny sons (like Keye Luke and Sen Yung) helped out now and again.

Yeah, there was some majorly politically incorrect stuff in those films; they were products of the times.  A number of writers/critics have blasted the Charlie Chan character for a variety of reasons I’m not going to get into.  I totally get where they’re coming from, to be sure, but I’ll leave it to others to blog about.

Contentiousness aside—yes Linda, I know a big word or two (okay, I confess, I heard it on CNN the other day)—the films were entertaining for various reasons.  Besides Charlie C solving cases through keen observation and topnotch investigative talent, the settings and clothes were awesome.  Even though most were filmed on movie sets, you could imagine the high-vaulted ceilings and plush decor belonging to stylish hotels and chic homes.  And those slinky silks and padded shoulders, tailored suits, and veils and hats—gorgeous!

Linda would want me to provide background, so here you go.  Charlie Chan was created by Earl Derr Biggers, who loosely based the Honolulu detective on Chang Apana, a Chinese-Hawaiian member of HPD.  More than four dozen films were made, with the first being a silent in 1926.  There were nine actors who portrayed the likable detective with the kind heart, with the first Charlie Chans portrayed by Asian actors.  In 1931 a Swedish dude named Warner Oland was selected for the role.  Sidney Toler took over when Oland died in 1938.  And Roland Winters claimed the role when Toler passed in 1948.

Flynn and Lynne used to have loud, heated debates as to who was the best Chan of the three.  I thought both Oland and Toler were solid actors, and did the role proud.  Winters was so-so, and that’s strictly a personal preference thingy.

In my research travels, I found reference to Chan radio broadcasts, comics, and cartoons from the 70s (who knew!?).  There’s a really cool site called The Charlie Chan Family Home that even has Monday night chats.  I spent a good hour there the other day.

Chan had a few fantastic food-for-thought expressions and I thought I’d leave you with three plum ones with a similar theme:

♦   To speak without thinking is to shoot without aiming.  ♦   Easy to criticize, more difficult to be correct.  ♦   Best to slip with foot, than with tongue.