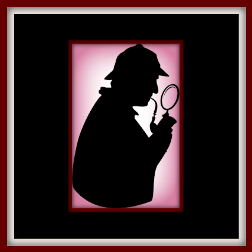 Because The Boss wants to take off a few days from posting, she asked us if we’d each post about our favorite detective—be he or she from books, TV, or films.  (Writing about Nancy Drew got her to thinking about sleuths and private investigators.)

Rey, JJ and I took turns playing rock-paper-scissors to see who’d post first, second and third.  I won—“I” being Linda, of course.  For me, it has to be the ever-brilliant “consulting detective” Sherlock Holmes, created by Sir Arthur Conan Doyle.

Although I enjoyed reading classic literature in my teens, I was never into mysteries or detectives, but once I began working as a screenwriting assistant, I hung around with film people who were into classic films.  Through them, I was introduced to a wonderful world of B&W movies . . . and Basil Rathbone.

A bit of trivia: Rathbone, along with Nigel Bruce as sidekick Dr. Watson, played in 14 films between 1939 and 1946.  The first, The Hound of the Baskervilles, was my favorite.  Rathbone’s exploits, coupled with Bruce’s wit, prompted me to pick up the stories with—yes—The Hound being the first.  I was hooked immediately.  For a short spell, I was even a bit of a Sherlockian.  There’s a cool site, by the by, called Sherlockian.net (“The Portal About the Great Detective”).

I took a quick gander and based on a 2009 CNN Entertainment piece, Sherlock “The Game is Afoot” Holmes has been played by 75 actors in 211 films.  Wikipedia claims 254 times as at 2012.  That’s pretty damn impressive.

The quintessential Sherlock Holmes for yours truly, however, was Jeremy Brett, who played him in 41 episodes from 1984 through 1994 (when Brett passed from heart failure).  I thought the series seemed like the real deal in terms of how I imagined 221B Baker Street and Victorian England to look and feel.  Others did as well apparently; praise was provided in spades re adhering to original concepts and Brett received accolades for his portrayal.

As an FYI, Brett once stated that “Holmes is the hardest part I have ever played—harder than Hamlet or Macbeth”.  Additional minutiae: Brett was the only actor who played both Holmes and Watson.  <LOL>  Rey’s usually the film enthusiast.  Hmm, speaking of, I wonder who she’ll pick as her favorite.  She wouldn’t tell us and simply said we’d have to read her post.

With that, I leave you with one of my favorite Sherlock Holmes quotes (from The Man with the Twisted Lip): “I confess that I have been blind as a mole, but it is better to learn wisdom late than never to learn it at all.”