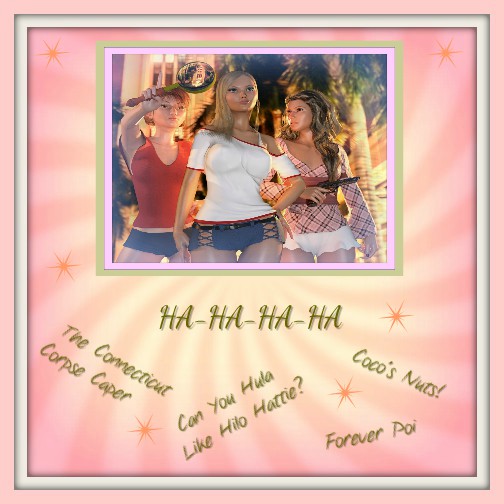 Not us gals at the Triple Threat Investigation Agency—we’re embarking on our next big case: HA-HA-HA-HA.

Now, it may take some time to solve (given The Boss has those time constraints), but we’re keeping the faith it’ll get done sooner than later.

It’s Rey by the way.  Hope you’re all doing well.  We certainly are.  In fact, JJ and Linda and me are super stoked—and, as that once popular saying used to go, we’re are so-o ready to rock’n’roll!

“What an f’g jackass.”  Shoving her thumbs in her ears, melodramatic Cousin Reynalda thrust out her tongue and wiggled long, slender fingers.

Standing alongside a looming, leafy shrub that served as target practice for strident feathery friends gliding and bounding nearby, Detective Sammie Sallo chose to turn just then.

Out came the thumbs and in went the tongue.  With a Hollywood [dazzling] smile, Rey waved with both hands, then tucked them into the pockets of daisy-imprinted cut-off shorts.

“Next time, sister, that tongue better mean business.”  With a buffalo snort, he pulled out a mouth-to-lung e-cigarette bundle.  Sallo resembled Stacy Keach’s Mike Hammer, right down to the mustache and fedora, an odd hat to be wearing on Oahu.  It arrived with him when he moved here two months ago from NYC to replace Devoy Hunt, a detective we’d just gotten to know.  He’d opted to move to “quieter, calmer” Kauai, the Garden Isle.

“Jackass,” she muttered, turning sideways.  “Why’d he have to choose the same time as us to come and check out the murder scene?”

“Timing’s everything,” Linda said gaily, giving him the finger when he turned back to view the canal.

The three of us—private eyes from The Triple Threat Investigation Agency (Rey’s choice of name)—hadn’t been officially hired for any particular case.  We had, however, received an odd email at 8:30 p.m. two nights ago that read: The game’s started, ladies.  Check out the area on Laau around the Ala Wai Canal.  I suggest you head there now.  HA-HA-HA-HA  Your loving GrimReaperPeeper.

Tourists, joggers, and strollers with frolicsome dogs utilized the sidewalk on the maiki (south) side of the canal.  On the mauka (mountain) side was a golf course, community garden and park, and boating facilities, among other things.  Sadly, people didn’t—couldn’t—swim in the Ala Wai anymore.  To do so could prove hazardous, because the 1.5-mile-long canal was a breeding channel for bacteria, heavy metals, and pesticides—never mind garbage.  Kayakers and canoe paddlers, however, seemed fearless, overlooking the fact that getting canal water on your skin or in your mouth could result in rashes and gastro-intestinal issues.  Hazards aside, it was a lovely stretch . . . although we might never quite few it the same way again.

GrimReaperPeeper had sent a message at the completion of our last major case, the third in the agency’s short history that involved bad-ass murderers.  Curious, we drove to Laau Street and checked cautiously around.  Given the vague directions, there’d been considerable ground to cover and as we were about to give up, Linda had stumbled upon four bodies stretched out before the canal by the Fisheries Management area—four bedraggled, bruised, blotched bodies with loose puckered skin as white as the underbelly of a perch and as translucent as a jellyfish.

Forty-eight hours in the canal, which served as both drainage ditch and tidal estuary, would have contributed to multi-hued patterns on regions still resembling human parts after aquatic inhabitants had feasted.  Would have, but didn’t.  These four souls had taken their initial swim elsewhere, before necrophagous insects came to feast and spawn.

Detective Sammie Sallo drew on an e-cig and exhaled at length.  Fumes twirled upward like coolant smoke flowing from a tailpipe.  Strolling back to join us, he eyed Rey’s face with obvious interest.  “Looked kinda like beached whales, didn’t they?”

An image of the humpback whales that migrated to Hawaii this time of year came to mind.  The migration was comparable to an Oregon cattle drive of yesteryear, a Macy’s Thanksgiving Day parade, or even a run of the grunion, marine fish related to the mullet that spawned from March to August on the first four nights after the highest tide of each full or new moon.  They were so predictable the California State Fisheries Laboratory published a timetable indicating when they’d appear.

Well, these four grunion had made it to shore all right, but they’d not completed their quest.  There’d been no dissolved oxygen to fan their blood, no sand to begin the regeneration process from, no purpose or hope to keep them alive.  And this ending was far from predictable . . .  although there had been a full moon that night.  Given that unusual things were reported to occur during one, was that significant?

It had been two days since the discovery of the bodies.  We’d returned this breezy afternoon to take daytime photos, poke around, and get a feel for what might have happened; Sallo, unfortunately, had had similar thoughts.

The fifty-year-old believed that the four had partied hardy, so he’d stated a few times that night.  Given his next words, he was still of the same mind.  “There was probably a group of them.  They got caught up in too much booze, maybe drugs too, and started playing weird cult games.  Maybe they were paying homage to the great god of Ecstasy and/or praying to Mr. Full Moon.  I’ve seen shit like this before.  Booze and drugs make people do bizarre things.”  He picked up a large coffee perched alongside a small plumeria tree, noisily gulped back what was left, and belched.

When it came to class, Sallo had as much elegance as Archie Bunker, a character that retro television wouldn’t let anyone forget.  Rey, Linda and I had met him three times in the last few weeks and while Detective Ald Ives (or “Hives” as Rey mockingly called him) seemed to get along well enough with his colleague, we found Sallo as abrasive as steel wool.

Linda smirked, tossing raspberry-red, shoulder-length waves.  “You really think a group of them got into ‘cult games’?”

“It sure looks that way, Royale.  Remember the marks on their chests?  In their fucked-up states, they’d probably thought it was a fun, freaky thing to do.  Matches the tatts on their arms and probably other body parts we’ve yet to see.”  He eyed her with dark amusement, like a deranged despot might his lackey.

“So friends just left them there after moon-and-drug worshipping, and what?  Went home to sleep it off?”

“Why not?  Come the morning, they realized how carried away they’d gotten.  They’re either now having issues coming to terms with it or they don’t give a rat’s ass.”

They’d been found facing the canal with arms folded neatly over chests.  Four black fabric roses, glossy and delicate, had been pinned to tops and shirts and all four had had floral designs incised into chests, possibly with a roulette—not the gambling game, but a small toothed disk of tempered steel attached to a hilt and used to make a series or rows of dots, slits, or perforations.

I kicked pebbles as I eyed the crime scene ahead, thinking it was time to visit an upset-irate client whose wayward hubby we’d finally caught being wayward—with her sister.  We’d promised to arrive around 4:15 to provide background, a report and invoice, but given Mrs. Starzeneiss’ “high strung” personality, we’d probably have to stick around to soothe ruffled feathers.

“Isn’t it possible they were murdered by a sadistic killer?”

He scowled, threw the coffee cup onto the concrete pathway, and popped a Tic-Tac.

With a sigh, I swallowed a rebuke.  Pulling a warm bottle of water from a Hawaiian print backpack, I took a long swallow and eyed fluttering, ripped police tape wrapped around several trees and shrubs.  A yellow ribbon tied around an old oak tree it wasn’t.  What it was, was jarring.  A reminder that something terrible had occurred.

There were often obvious if not improbable gaps in Sallo’s hypotheses, but he wasn’t the sort you could argue with—not without wanting to bang your head against a wall or three.

I nodded to my Jeep parked several yards down, under a bright lemon-colored sun.  Thankfully, the sunroof and windows were open (I didn’t much care for A/C).

She blew a raspberry and the three of us moseyed to the car.

“Can you spell jerk?” Linda asked, pulling an apple banana from a large crocheted tote.

“What’s up, buttercup?” a baritone voice boomed from behind.

Linda and I exchanged amused glances.

“You always pop out from behind parked SUVs like that?” I asked.

Jimmy Carcanetta, a freelance writer and blogger Linda had gotten to know in the last couple months, grinned like a toddler who’d just be given a huge slice of cake.  His pumpkin-shaped head bobbled like a fishing bobber.  “Nothing like the element of surprise.”

“What brings you here?”

“The same thing that brought you guys here: a need to piece things together and get a feel for what happened.”

“Your article on the murders was good.”

“For a food and wine reviewer,” he chuckled, pulling a new Canon camera from a faux-leather bag.  “Thought I’d take a few more pics, for context.”

“Any new findings or thoughts?” Linda asked, leaning into the passenger door and taking a chomp from the apple banana.

“Not yet.  Just mulling over facts.  They’d been missing two days and died on the twenty-sixth, or thereabouts.  They’d been meticulously mutilated—and please don’t attribute it to cult games or weird rites.  I heard that from the ass back there the other day.”  With a glower, he jerked a thumb rearward.  “What crap.  . . . Any thoughts about the fact they’d been so neatly arranged, with roses yet?  That seems very specific, as if the killer were leaving a calling card.”

“Who says the roses came from the killer?” Linda added.  “They might have been a club or party signature thing.  The four may have been wearing them before they were done in.”

“Yeah, but the incisions resembled flowery embroidery.”  He scanned the end of the street.  “I’m thinking there was a connection between the two, even if Sallo won’t admit it.  Why though?”

“Why won’t he admit it?  Or what’s the connection?”  I smiled drily.  “I have a feeling the detective’s going to prove a thorn in many people’s sides.”