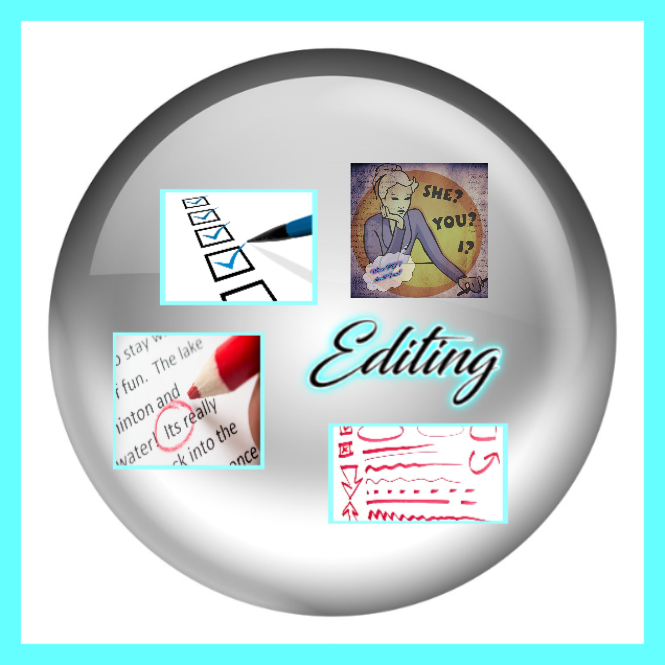 This week’s editing post revolves around Point of View (POV), which relates to who’s telling the story.  It’s the narrative voice that pilots readers through the story—the one that allows us to get to know the characters, learn about locations and settings, connect with emotions and feelings . . . and be pulled into friction and conflict (as discussed in the previous post).

Select the POV: will it be first person, second person, or third person?  Here’s a quick sum-up of what each entails . . .

First person: readers follow your story through the narrator’s eyes.  He/she is usually a main character who uses “I”.

⇒  From behind a crumbling pillar, I watched him stroll determinedly into the dim derelict dive.

Second person: readers, essentially, become a distinct character in your story.  They’re addressed as “you” (there’s no “I”).  Leaning toward intimate, this POV is untraditional, probing and exploratory, and is infrequently used in fiction.  It’s also difficult to utilize effectively.

⇒   As you round that corner, you’ll see amber lights lining the dilapidated lighthouse perched precariously on steep cliffs.  It’s an eerie sight, especially when you sight the bats that make their home there.  On one hand, you’re awed by the isolation; on the other, you’re overwhelmed by the vastness of the sky and sea.  Perhaps you even feel a need to soar like an eagle over the precipice, as troubled young John Smith did one chilly night in the summer of 2017.

** You’re being told how to do or react to something or someone.  **

Third person: the storyteller (narrator) is someone outside of the story, who details characters and events/actions.

⇒   John was as odd as a three-dollar bill.  Kids in school had shied away from him, much like his siblings.  His thought processes weren’t quite “normal”, so his perpetually frazzled mother often claimed.

First Person POV is limited to one character.  A “view” of what’s transpiring solely from his/her perspective enables you to get close and personal.  Myself, I love getting into the main character’s head and discovering what makes him/her tick and how conflicts are eventually resolved.  The narrator should show and not tell.  Try not to spend an inordinate amount of time relaying what the main character is thinking and feeling; let us know what’s happening, too.

Third person POV, depending on which of the three you employ, can prove limiting.  If you’re using Objective Third Person or Limited Third Person, the narrator only provides a little insight into the thoughts and feelings and goals of a character or characters.  If you’re going for Omniscient Third Person, more awareness is created via various characters’ thoughts, beliefs and motivations.  With Third Person, you receive the intimacy of First Person, but you’re also preserving distance; you’re not stuck with one character’s thoughts or feelings, motivations or goals.

There are pros and cons for all (do that due diligence and find a list or two), but once you’ve selected a POV for your story, stick with it from the start.  You’re looking to create believability (and credibility as an author).  Don’t seesaw between two POVs, at least not too often, and if you’re going to do so, make certain it serves a viable purpose.  I’ve seen this done (by one of my favorite writers, in fact); I found it jarring and annoying.  Allow my beloved main character to tell the tale; don’t [try to] pull me into his best friend’s head, too. 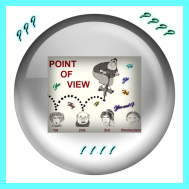 Generally, POV just sort of picks itself when you start writing; something clicks.  Be aware: you’re never trapped by the one you’re using.  Try different ones as you work on a project.  Write an existing chapter with a new POV.  See how it feels and works.  If it’s not working, discard it.  If it is, explore it further.

POV should bear in mind who the narrator is, what his/her background and experiences are.  Don’t have the narrator using flowery or specialized vocabulary if he or she is a construction work, high-school dropout, or lifeguard.  We all speak with particular sentence structures, a certain level of education, accents or dialects, idioms and contractions.  Ensure narration is appropriate to the POV.

On a related note, consider dialog.  What words would your narrator use (or not use)?  Background, education and experience play a great part re terms and expressions, and phrases used when your narrator—and other characters—speak.

Give thought as to how the narrator, your storyteller, observes [and interprets] things.  What might he or she discern [that someone else would not]?  For example, upon first meeting someone, I tend not to notice the face as much as I see a feature (scar or tatt), piece of interesting jewelry, or item of clothing.  What about you?  We all notice things differently.

Think of POV as a camera, film or photo.  It views the world through a lens.  What is it showing?  And how is the storyteller perceiving and relating what’s viewable in said lens?

When you’re providing a narrator’s POV, make sure it belongs to him or her.  You may be scared of snakes and squeal upon sighting one; Lisa may not.  You might hate yogurt, but Frank can’t stop sucking back the dairy product.  Make sure POV describes accurately and appropriately what the narrator is undergoing.  It’s the narrator—the storyteller—who’s conveying the tale and not you. 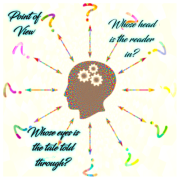